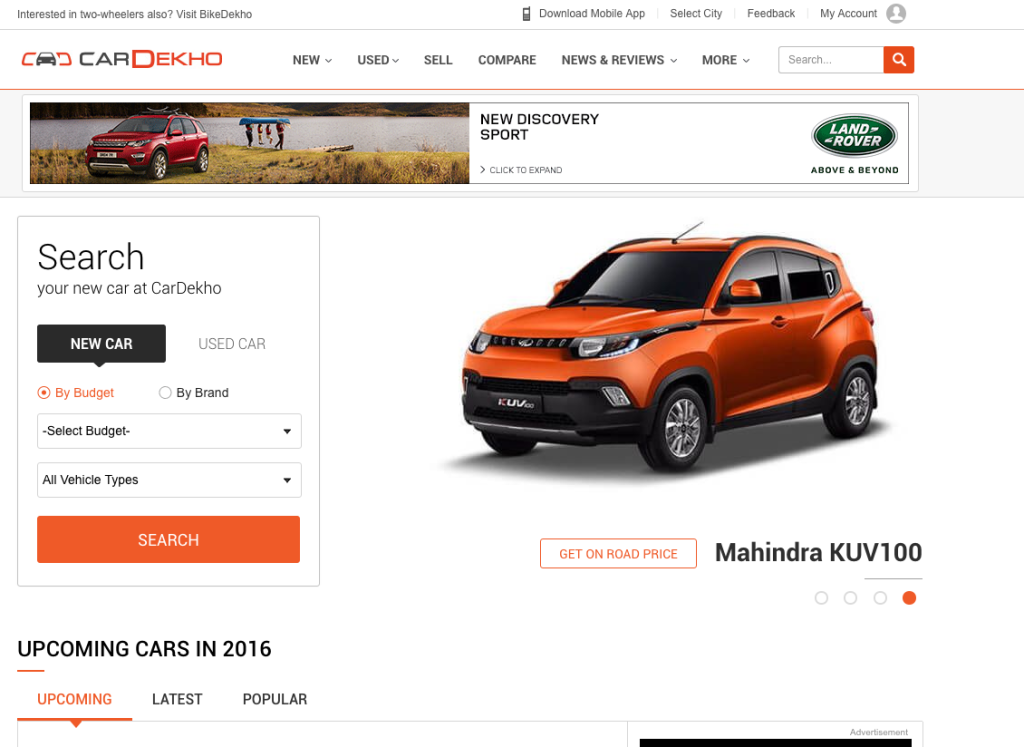 Entrepreneurship, one of the world’s most sought-after pursuits is often mired in adversities. Entrepreneurs have to wage battles against Goliaths of despair and disappointments. Despite the fact that odds are stacked against the entrepreneurs, it is undoubtedly the determined entrepreneurs who foster the innate desire to succeed eventually emerge victorious.

CarDekhot is an online portal that goes way beyond the boundaries of facts and figures in its exploration of the glamorous and exotic world of cars, providing complete freedom to the car-fanatics of India to watch, know and understand the deepest passion of their lives in much greater detail and from a wide variety of viewpoints.

Stringing together a comprehensive set of pages, each of which presents a new window into the automotive universe, this auto-portal talks about every existing car-breed ranging from hatchbacks, which are the smallest and yet the smartest members of the automobile community, to the electrifying super cars, which reign over the fantasies of car-enthusiasts across the globe. The Baby Steps – Then

It all started in the year 2008 when the foundation stones for this venture were laid by a team of four individuals. Amit Jain and Anurag Jain are the co-founders of CarDekho who filtered noise from media, fact from fiction and went on to scale this venture. Prior to 2008, Amit and Anurag were making some substantial revenue through their IT outsourcing business unit. Thanks to this revenue, they did not raise VC capital in the early stages of CarDekho. By the way, both Amit and Anurag are distinguished alumni of IIT-Delhi and yes, both are brothers.

In the year 2013, the co-founders raised a huge amount of $15 million from Sequoia Capital, the American venture capital firm based out of Menlo Park, California. In this ultra-competitive entrepreneurial world where any potential startup is evaluated on the amount of funding it has raised, CarDekho has successfully carved a niche for itself. CarDekho has served as many as 3.4 crore customers in its first four years.

All the people who are interested in buying cars are CarDekho’s target audiences. To put it precisely in the verbatim of Anurag Jain – “All car-enthusiasts are our target audiences.” Be it any kind of business or any niche of business, marketing on television is vital for the existence of the brand. Strangely, CarDekho is yet to advertise on television. On the supposed subject of advertising on television, Amit said, “I believe that the lack of Return on Investment (ROI ) and real impact had discouraged us to buy expensive ad spots on prime-time television shows.” That being said, he never discounts the importance of television.

The big three operational markets for this venture are Delhi, Mumbai and Bangalore. Other operational markets that fetch some decent revenue are cities like Jaipur, Rajkot, Indore and Guwahati. One can easily infer that the demand from Tier-II and Tier-III cities is on the rise.

CarDekho has two operational segments- Used car segment and the new-car segment. The new-car segment accounts for a whopping 80 percent of its business. That being said, Anurag Jain sounds optimistic and says, “We are currently work on our slew of measures to aid and assist users in evaluating all criteria and balances of used four-wheelers. Hopefully, in the coming years, used-car segment is going to be big.”

Let me mention some numbers for you. It is estimated that more than three million used vehicles are sold and bought every year in India. Let the truth be spoken- This is an unorganized market where a large fraction of the deals happen offline. At present, CarDekho dominates an estimated yet a decent 25 percent of the online market for used vehicles.

In October 2015, CarDekho acquired Zigwheels. Amit termed the acquisition as “A revenue making proposition.” According to Amit, Zigwheels had the right vision to drive intelligent business prospects in C2C business space. Well, Cartrade seems to be its closest rival. The buzz is that Cartrade has raised $43 million across two rounds. And yes, the news is that Cartrade has forayed into used-car segment as well. In a nutshell, CarDekho and Cartrade are engaged in a neck and neck battle. To all Startup whale readers and budding entrepreneurs, here is what the brothers have to say,

“Aspire and get inspired. Aspire for great things in your life and toil hard till you fulfill your aspirations. Learn to live with the flow and strive for making a mark for yourself”